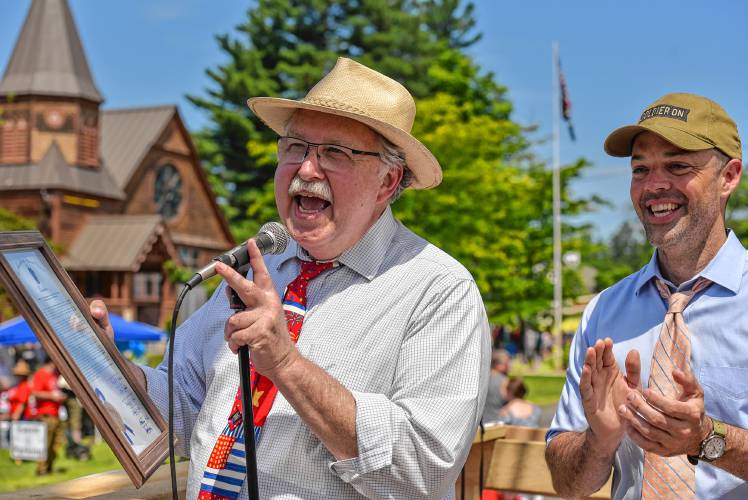 State Rep. Stephen Kulik, left, and state Sen. Adam Hinds read a resolution from the Legislature recognizing the 250th anniversary of the incorporation of the town of Worthington at the conclusion of a parade June 30. GAZETTE FILE PHOTO

Massachusetts, like the rest of the country, is experiencing growing disparity between rural and urban centers.

To reverse this trend, Massachusetts requires a rural strategy for economic growth. We must do more to attract investment that retains and expands existing jobs, stimulates the creation of new jobs and attracts new business and industry in these parts of the commonwealth.

Between 2010 and 2017, the nation’s population grew by some 17 million people. But while cities grew, it was the first extended period on record with population decline in rural areas as a whole.

The same was true in Massachusetts. Between 2010 and 2017, the population of the commonwealth grew by some 312,000 people, while the population fell in three of our most rural counties: Berkshire, Franklin and Barnstable.

Since the Great Recession, a larger percentage of jobs have returned to metropolitan areas. In rural Massachusetts today, workers earn 71 percent of what their urban counterparts make. Our residents are also older, and many do not have college degrees. When taking these trends into account, we can understand why business is booming in Boston, while rural regions of the commonwealth are being left behind.

As elected officials representing rural western Massachusetts, we’ve worked together to reverse this trajectory. Specifically, we’ve fought to bring high-speed internet and improved rural transportation to the region as well as links to regional economic centers. We’ve worked to bring more money to our rural schools. And, we’ve supported our regional employment boards and a middle skills manufacturing initiative, which trains people in our region the skills they’ll need to get jobs in advanced manufacturing firms.

But there is more we can do.

We have introduced the Rural Jobs Act for Massachusetts. This legislation is aimed at attracting private capital investment to the small communities that help make up our commonwealth. This month, the state House of Representatives and Senate are debating an economic development bond bill, and this should be a part of that effort.

The Rural Jobs Act is designed to bring millions of dollars in private investment to businesses in rural areas across the state, so they can buy equipment, expand facilities, grow revenues, and increase the number of good-paying jobs. Connecticut, Georgia, Ohio, Pennsylvania and Utah have enacted similar programs to increase wages and jumpstart economic growth in rural parts of those states. Massachusetts should follow suit.

Here’s how the Rural Jobs Act works. The legislation establishes so-called rural growth funds. These funds are to be run by managers with a track record of having invested $100 million in small businesses, with half of that money in rural America. Investors, both in-state and out-of-state, would buy into these rural growth funds. Fund managers themselves would contribute 10 percent to these funds so they have “skin in the game,” and would pay penalties if job creation targets weren’t met.

In exchange for investing in these funds, in-state investors would receive state tax credits in years three through six of the program. If the investments don’t produce expected result, those tax credits would be recaptured.

The funds would be invested in qualified small businesses in rural areas of the commonwealth within two years. Business would receive low-interest loans and/or equity with highly flexible terms. For the purposes of this legislation, all 60 of the cities and towns that the two of us represent in Berkshire, Hampshire, Franklin and Hampden counties would be considered rural.

Qualifying businesses would have fewer than 250 employees and show less than $10 million revenue from the previous year. Investments would be aimed at manufacturing, agricultural-tech, plant sciences and high-tech companies, or others determined by the state’s Office of Business Development that could make a significant impact on economic growth.

The program would help drive more than $200 million of investment, utilizing a public-private partnership to grow rural small businesses, create jobs and bolster communities. This approach guarantees growth capital for these regions of the commonwealth and does it in a responsible way by utilizing transparent performance goals that protect taxpayer dollars.

The cities and towns in our region were once home to large textile, machining and paper plants. Today the region is home to hundreds of smaller, specialized manufacturers. Some of these small to medium-sized firms are thriving; yet others are feeling the pinch of tighter bank lending practices since the recession of 2008 and a lack of access to private venture capital.

With an influx of capital from the Rural Jobs Act, we expect many of these businesses to invest in new equipment, new facilities and new hires, driving economic growth in our region. We’d expect such activity to cause some of our younger residents to decide to make a life here and draw other young workers to move into the region. We’d expect to see similar results in other non-metro areas across the state.

Our rural communities constitute more than half of Massachusetts’ towns and 60 percent of the land area. They have much to offer: affordability, quality of life, and access to nature.

But providing another source of investment for rural businesses to grow, create jobs and support their local communities is key. Join us in standing up for rural Massachusetts and ensure the entire commonwealth can contribute to our economy.